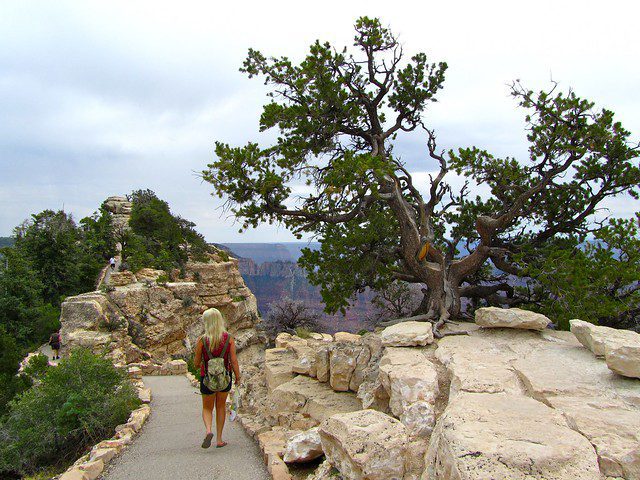 The Grand Canyon is by far one of the most popular tourist destinations in the United States. Attracting upwards of 5 million visitors per year, this steep-walled canyon is one of the most well-known natural wonders in the world. People flock to its rims from all over the world to peer into its depths.
And for good reason. Because, even if you tend to shun “touristy” destinations, the Grand Canyon is sure to blow you away.
You can see this work of Mother Nature in photos and in movies. But, until you’re actually standing on one of its rims and squinting down at the Colorado River a mile below, you can’t truly understand its magnitude.
Even better, the Grand Canyon does not just have one side or vantage point to awe you with, however. It actually has three distinct and different rims that you can visit: the South Rim (the most popular), the North Rim (the lesser touristed), and the West Rim (the newest to open to visitors).
Of course, do pay each of them a visit. But what if you can only visit one? How will you choose? Let’s compare between the North Rim and the South Rim!

The Grand Canyon is not exactly the most accessible tourist attraction. It’s in the middle of nowhere in northern Arizona, and only has a couple of main highways that lead to it. Even though the North and South rims are only about 17 miles apart as the raven flies, there’s just one 220-mile driving route available to take you between the two sides that will take you roughly 5 hours to traverse.
The North Rim is only accessible via Route 67, which branches off of Route 89A in the town of Jacob Lake. Due to the road often being impassable during the winter months, the North Rim is only open from mid-May through mid-October. Which is probably why it is much less visited. It also isn’t nearby any major cities/towns. The closest town of any size beyond Jacob Lake is Page, Arizona, a 2+ hour drive to the northeast.
The South Rim, in comparison, is open and generally accessible year-round via Route 64 from either the east or the south. It is 1,000 feet lower in elevation than the North Rim, so the roads here are usually not closed due to snow in the winter. Several Arizona towns are within 2 hours driving distance from the South Rim, including Williams, Flagstaff, and Sedona, and a variety of tours and/or shuttles depart from these towns for Grand Canyon National Park each day if you don’t have a car of your own. In fact, it’s suggested you don’t drive here at the South Rim. Instead, it’s recommended you park your car and use the park’s free shuttle service to get between each viewpoint.

If you have your heart set on staying within Grand Canyon National Park during your canyon visit, good luck. Accommodations can be booked up to a year in advance in some cases, and they fill up quickly. You can stay outside of the park, though the bigger cities that would have multiple hotels/motels are usually at least an hour or two away.
Because the North Rim is only open for half the year, and because it’s further away from any major settlements, there isn’t much here by way of amenities. There is only one accommodation option here that isn’t a campground, and that’s the Grand Canyon Lodge. The lodge is only open as long as the park is, and its bare-bones cabins book up months in advance. (However, the lodge’s remote location does make it pretty epic.)
The South Rim is home to Grand Canyon Village, which offers about 7 different lodging options, ranging in price from $81 to $426 per night. There are also some campgrounds in the area, as well as smaller towns 15-30 minutes away that also have accommodation on offer. The South Rim also has shuttles that will cart you around to the various viewpoints — including a few that are not accessible by private vehicle.
Comparison winner: Draw. While the South Rim has more options, there is also more demand for them. The Grand Canyon Lodge at the North Rim is more rustic, and much less chaotic than Grand Canyon Village.

The Grand Canyon isn’t officially a Wonder of the World, but it very much deserves to be one. People come from all over the world just to look at it. In fact, the whole point of visiting is usually to just look at it and be in awe. The viewpoints, therefore, are important to consider.
The North Rim only has a few main viewpoints, including a couple that are only accessible via long, windy dirt roads that can take up to half a day to traverse. However, the North Rim does boast the Grand Canyon’s highest viewpoints, at over 8,000 feet. The most popular is Bright Angel Point, which is just a short walk from the Grand Canyon Lodge. From here, you can take in sweeping views of the canyon, and see all the way to the South Rim. Other popular viewpoints are Point Imperial (the highest point on the North Rim at 8,800 feet) and Cape Royal (popular for sunsets).
The South Rim, on the other hand, has a ton of viewpoints, most of which are close together and easily reachable. Starting near the east entrance of Grand Canyon National Park, there’s Desert View — the first viewpoint in the park. Here, you can climb an old watchtower for stunning views out over the canyon. Continuing on along toward the Grand Canyon Visitor Center and Grand Canyon Village, there are more than a dozen stunning viewpoints to stop at. Shuttles at the South Rim can take you to even more viewpoints that are not reachable by car. I watched a sunset at Mather Point, which was amazing.

But here’s the point you’re probably most interested in — which rim has the best views? Well, it’s all relative, of course. Here are some things to consider.
Even though the North Rim has fewer viewpoints, the viewpoints it does have are absolutely amazing. The colors of this side of the canyon are rich and vibrant. The layers of red and white present in the steep canyon walls, speckled with the dark green of trees and shrubs, will amaze you. Bright Angel Trail leads you right along the edge of the canyon here, making it feel like you’re actually in the Grand Canyon. It was the North Rim that could make you really realize just how huge and deep the Grand Canyon is.
The South Rim also has great views, of course, and each viewpoint offers up a slightly different angle. The colors weren’t as vibrant on the South Rim, though that could have been because the viewpoints didn’t make you feel like you were in the canyon like Bright Angel Point on the North Rim. If you happen to see a sunset on the South Rim, though, then it might make up for some of the other less-impressive views. Sunset at the Grand Canyon is nothing short of stunning.

This item, to some, is the most important. Especially in the summer months, the Grand Canyon is such a popular destination. Some may hate having to jockey for position just to snap a photo, so the density of tourists is so important to mention here.
The North Rim sees, by far, the least number of Grand Canyon tourists. Since it’s more difficult to get to and less well-known, many visitors to the park simply skip the North Rim, heading straight for the South Rim instead. This means that the North Rim is blissfully empty, even during the busy summer season. There was no need to worry about someone getting in your photos, and there was no rush to move away from the edge of the viewpoints so others could get a look.
The South Rim, by contrast, was much more crowded. Which is not surprising, since this rim sees 90% of the Grand Canyon’s tourists each year. An alternative is to visit this rim in the evening, so that there isn’t the crush of tourists to worry about. But there still were plenty of people at each of the viewpoints. And, come sunset time, the viewing platforms at Mather Point filled up to the point where you had to pick a spot along the rail and stay there if you had any hope of getting good photos. While it may not bother some people so much, it was a far cry from the relaxing atmosphere at the North Rim.

The price to enter Grand Canyon National Park is the same no matter where you enter ($25 per vehicle for a weeklong permit). However, some prices of popular activities differ from rim to rim.
For example, half-day donkey rides at the North Rim run $75 per person. These mule trips do not go to the bottom of the canyon, but still take you beyond the rim. At the South Rim, a 3-hour mule trip will set you back almost $120 per person.
Because the South Rim is much more popular, prices for some activities (as well as lodging and food) may tend to be a bit higher.