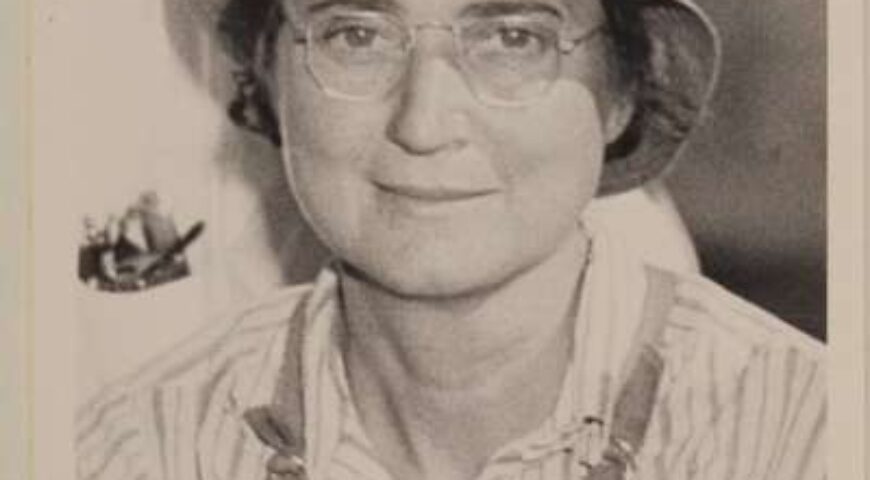 Elzada Clover: The Botanist Of The Grand Canyon

Elzada Urseba Clover was born in Auburn, Nebraska in 1897, the seventh of nine children of Maynard French Clover and Sarah Gates Clover. She had six sisters (Alice, Mabel, Bessie, Vida, Cora, and Maud) and two brothers (Maynard and Verne).

She grew up on her father’s farm and attended high school in the nearby town of Peru. Her mother died in 1913 and her father remarried around 1925 and moved to Texas, where he set up as a farmer near Alamo.

Clover began her career as a public school teacher in 1919, working first in Nebraska and later in Texas; she also supervised an Indian mission school in the latter state. She graduated from Nebraska State Teachers College in 1930 and went on to the University of Michigan, Ann Arbor, for her M.S. (1932) and Ph.D. (1935) degrees. The subject of her doctoral thesis was the vegetation of the lower Rio Grande Valley. via University of Utah

Elzada is most famous for her 1938 expedition down the Colorado River. In fact, she was the first woman to successfully travel by boat down the Colorado, at the time still largely unexplored and treacherous. During that expedition, she planned to record and discover new plant species along the river.

While that is a long list of accomplishments for any individual, Elzada Clover did this at a time when for the most part women weren’t accepted in the sciences. She heard repeatedly before her expedition that the Colorado River is “no place for a woman,” and she was denied any title above instructor for many years at the University of Michigan. Elzada Clover proved them wrong. And she is credited with identifying over 50 species of desert plants and powerfully influencing the future of botany. No woman had launched down the Colorado River and survived. The river had claimed many men, too, with its force and fury. Knifing through seven American states and parts of Mexico over 6 million years, the river had created a deep, winding gouge in the earth best known for the Grand Canyon.

The lone woman to attempt the river had been Bessie Hyde, who with her husband, Glen, set off in 1928 for their honeymoon. Both the trip and marriage were short-lived; the Hydes never reached their destination and their bodies were never found.

Now came a U-M professor and a graduate assistant named Lois Jotter. “Just because the only other woman who ever attempted the trip was drowned is no reason women have any more to fear than men,” Jotter told a reporter.

Elzada was appointed an instructor in botany at the University of Michigan in 1935, as well as assistant curator of its botanical gardens. With her research and teaching focused on the Cactaceae, Clover was collecting cacti in the Colorado Plateau (Utah) in 1937 when her dreams of exploring the plants of the Grand Canyon first began to take shape.

She then started planning a research trip down the Colorado River to catalog its flora, and the university gave her some funding for the trip in the expectation that it would yield specimens for its collection. Although she originally intended to go by pack mule, she discussed the idea of going by boat instead with the pioneering Colorado River boatman, Norman Nevills, whom she met on a collecting expedition in Mexican Hat, Utah. via University of Utah

Rushing down the river in three green-and-white wooden boats, Clover, at 42, was the oldest. In addition to teaching botany at U-M—where she had earned her doctorate—she was an assistant curator at the Botanical Gardens. Jotter, the daughter of a U-M forestry professor, was studying both botany and biology.

Also on the trip were graduate students, Eugene Atkinson, artist Bill Gibson (who took photographs and film of the trip), and, as Nevills’s assistant, a U.S. Geological Survey geologist named Don Harris. Part way through the trip, due to tensions among expedition members, Atkinson left and was replaced by photographer Emery Kolb.

Clover and Jotter floated the Green and Colorado rivers in 43 days, cataloging the plants they found along the way. The female botanists made plant lists and collected specimens throughout the trip, although the rigors of the journey—especially lack of space and difficulty keeping specimens dry—meant that they ended up with fewer specimens than they had hoped.

They described the canyon as having five plant zones, from the moist sand along the river’s edge up to higher zones with shrubs and trees. Most of what they found were typical riparian species, with a major exception being tamarisk, a non-native species that they saw in a few locations. They found very little snakeweed, which has since become common throughout the canyon. They published their findings six years later in a scientific journal under the title, “Floristic Studies in the Grand Canyon of the Colorado River and Tributaries.”

After the successful river run, Elzada Clover spent her entire career at U-M, slowly climbing the faculty ranks to become a full professor in 1960. Over her career, she identified nearly 50 species of cacti, begonia, mosses and other plants in the United States, Guatemala and Mexico. She retired in 1967 and died 13 years later. In 2007, the University established the Elzada U. Clover Collegiate Professorship in the College of Literature, Science, and the Arts.

The cactus she collected along the Colorado River and shipped to Ann Arbor became the foundation of the desert collections at what is today’s Matthaei Botanical Gardens. In thanking Clover, the Board of Regents called the plants “her continuing monument.”

Clover and Jotters’ survey of plant life, completed on about 600 miles of river, remains the only comprehensive study of plant life in the riparian ecosystem before Glen Canyon Dam altered the landscape.