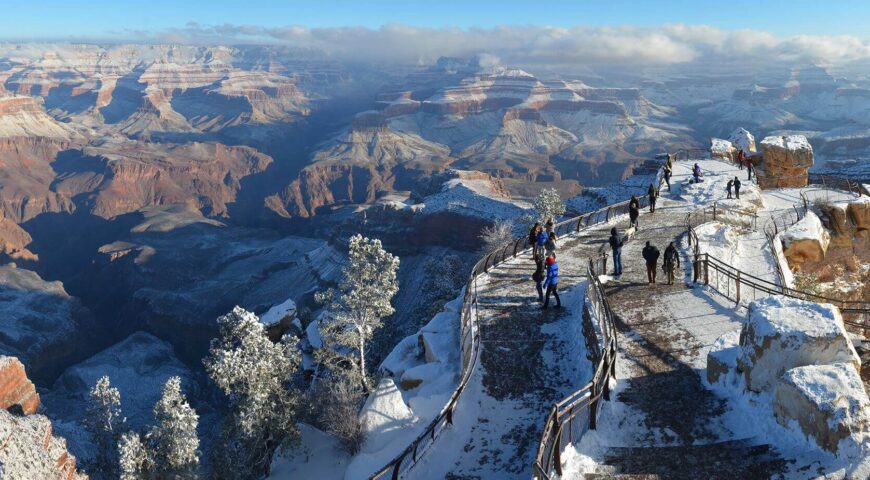 Visit the Grand Canyon this Winter for The Best Experience

Winter storms add new color and dimension to an already stunning landscape. Think of it as the secret season of the Grand Canyon. Open all year round, the South Rim of the canyon is surprisingly busy from mid-winter between December and February. Even if you’re here in the summer, it’s worth considering an off-season trip to see this world wonder from a whole different perspective. Here are his six things to love about Winter in the Canyon.

The crowds are dwindling – down to less than 10% of annual attendance – the pace has slowed and everything is quieter. Yes, tour buses still arrive, but at other times Its just part of the bus. With the exception of the Christmas holidays, bookings for hotel accommodations and restaurants in the parks are almost guaranteed. Similarly, backcountry permits are easy to obtain. Nightly rates and packages also tend to be cheaper.

The winter sun is so low in the sky that it does not set directly over the canyon, instead covering the rocky peaks and crevasses in beautiful shades of purple, pink, and orange. Novice photographers appreciate the clarity of the light, especially at this time of year, just after a snowstorm. The sky is clear at this time of year, so transparency is at its highest. On clear winter days, the summit can be seen from several vantage points about 200 miles away.

Private vehicles are permitted in winter, although some roads are only open to shuttle buses at other times of the year. Most notable is Hermit Road, which is passable by car from December until February (unless it is snowing). At the western end of Grand Canyon Village, the scenic drive follows the rim to Hermits Rest, a beautiful stone road station built in 1914.

Deeper in the canyon, winter temperatures are actually milder. Daytime temperatures can reach around 60 degrees Fahrenheit at Phantom Ranch, a lodging and camping ground on the Colorado River on the Canyon Floor. At the top of the South Rim, at an elevation of 7,000 feet, daytime temperatures between December and February are typically 30s to 40s. This makes hiking much more comfortable than on a humid summer day. With only a handful of people on the trail, it can feel like you have it all to yourself. Even on the coldest days, in the lobbies of many South Rim hotels, he can rest assured that a warming fireplace awaits after a day in the blistering cold.

Winter storms add new color and dimension to an already stunning landscape. Overlooking the canyon the day after a snowfall is a surreal experience. On a clear, sunny day, the trees, rocks, and cliffs stand out against the bright blue sky.

Wildlife is still abundant. Mule deer, moose, ravens, rock squirrels, and other creatures can be seen foraging and hovering over the edge of the ponderosa pine forest. They may be easier to spot in front of the new snow cover.

Get in touch with us for more information.
visit christiansontours.com or call (702)456-9200